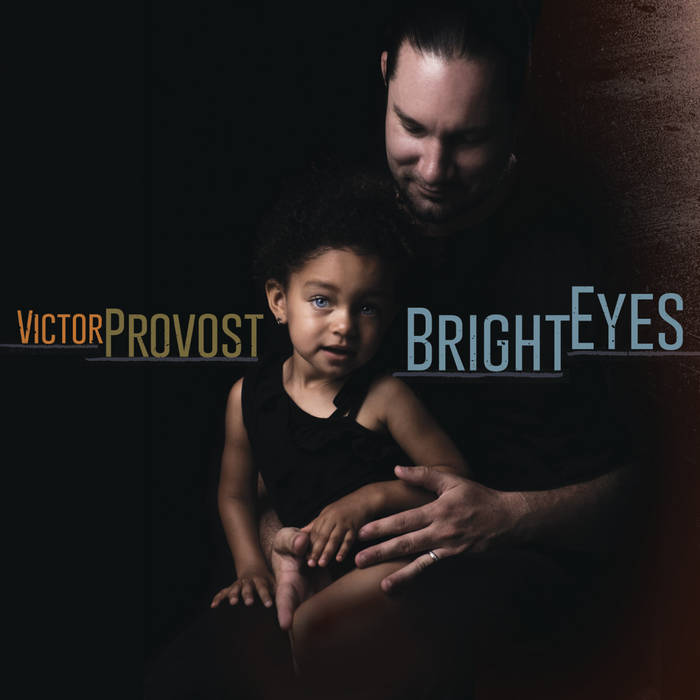 Beginning a new chapter in life can lead to unexpected opportunities. Steel pan master Victor Provost has met each new phase in his life with enthusiasm and an effort to use the momentum of change to spur his creative forces. It was while expecting his first child’s birth that he funneled his nervous excitement into composing and recording his new album, Bright Eyes.

Growing up on the island of St. John in the Virgin Islands, Provost was introduced to music early, first by his guitar and piano playing father, who had played as an amateur in New England and New York City and who, with his wife, had moved to rural St. John in the 1960s. Provost began on piano, taking lessons when he was 9 years old. It was about this time that he discovered what would soon be his real musical voice, the steel pan.

Provost first heard the steel pan nearly by accident. Having heard an attractive sound emanating from the small St. John School of the Arts, he went to investigate only to find a large group of young people (including classmates) making a big, beautiful sound on steel pans. He was attracted immediately, especially to the communal aspect of music making with the pan, and joined their ranks.

The high school Provost attended didn’t provide a music program, so all of his exposure was in after school programs. At age 15, Provost began to dig into his father’s record collection, discovering the sounds of Cannonball Adderley, Chick Corea and João Gilberto and thus getting hooked on jazz. After convincing his parents to purchase a used pan, Provost spent hours copying the horn players on these recordings, developing quite a bit of facility but no foundation.

Provost moved to Pittsburgh where his studies in computer science quickly lost out to his interest in performing. He began performing regularly with R&B and jazz influenced bassist Arnold Stagger’s band, which taught him much about interacting with a jazz rhythm section. It wasn’t long before Provost’s wife wanted to leave Pittsburgh and they relocated to Virginia. The move prompted Provost’s decision to really get his playing together. He spent a year delving into the study of Jazz and music theory, mostly via the Internet. He then began nearly two years of correspondence lessons with Charlie Banacos, the legendary Boston based jazz educator, and followed it up with a Bachelors and Masters in Music at George Mason University, where he now teaches.

In 2013, another chapter began. Paquito D’Rivera was booked to perform in Chile and wanted to reconvene his Caribbean Jazz Project, which originally featured vibraphonist Dave Samuels and steel pan player Andy Narell. Narell was unavailable, so D’Rivera’s pianist and Maryland native Alex Brown suggested Provost, whom he had played with a number of times around the Washington, DC area. D’Rivera enlisted Provost for the tour and continued to call Provost for gigs, sometimes augmenting his quintet, and sometimes as substitute for his regular brass player, Diego Urcola. The relationship also led to the recording of Bright Eyes.

Naturally, Provost had studied the work of other improvising pan players, including Narell and Othello Molineaux. His own style had stemmed from the language of bebop and modern jazz, so he chose to stop listening to pan players for reference. Provost’s feeling was: “An instrument is an instrument, you have to make it do something.” Like pan pioneer and band director Rudy Wells, who left the Virgin Islands to study with Milt Jackson at Berklee, Provost began to follow vibists, including Jackson and Dave Samuels, but continued to keep a varied listening diet including saxophonists and trumpeters, all the while attempting to emulate their idiosyncrasies on his own instrument.

For Bright Eyes, Provost wanted to assemble musicians he felt would be able to balance the influences of jazz and Caribbean music. He called on his friend Alex Brown to take the piano chair. He also enlisted Alex’s brother Zach, a remarkable bassist who has been in New York for a number of years playing with the likes of Terri Lyne Carrington and D’Rivera. The Norfolk, Virginia based drummer Billy Williams, Jr. was a perfect choice, as he could bring his swinging sensibility to anything thrown at him. The simpatico quartet was quick to become a cohesive unit because of their combined histories playing together, the Brown brothers over a lifetime and all three with heralded vibraphonist, Warren Wolf.

Just prior to his daughter’s birth in 2014, Provost found himself inspired by his impending life change. This kick started his writing a program of compositions that span a wide spectrum of influences from contemporary jazz to R&B and Caribbean music to swing.

The recording begins with the jazz funk with a Trinidadian bottom of “Eastern Standard Time,” that features DC friends tenor saxophonist Tedd Baker and guitarist John Lee. Vince Mendoza’s beautiful “Ella Nunca Tiene Una Ventana” is a feature for Alex Brown’s piano and features the great Paulo Stagnaro on percussion. Channeling the vibe of summers spent in Trinidad as a teenager, Provost wrote the upbeat and invigorating “Fitt Street.” The title track is a ballad tribute to Provost’s young daughter and features the amazing Joe Locke on vibes. The beautiful rendition of Lord Kitchener’s calypso “Pan In Harmony” is a welcome take on this folk classic.

Echoing the sounds of D’Rivera’s Caribbean Jazz Project of the 1990s, “Homenaje” is a tribute and feature for the great Cuban saxophonist. The funky “Fete Antillaise” is a spirited take on the Martinique tradition of mazuka, a type of Africanized marzurka particular to the French Caribbean. “Twenty” is an introspective piece that was written to cope with the aftermath of the Sandy Hook shootings. Written for his wife in an inspired moment, “Song for Chelle” is thoughtful and moving. Tom Glovier’s appropriately named “La Casa de Fiesta” is a dynamic piece utilizing a bebop head over a mixture of Baião and Calypso rhythms and it features fellow Virgin Island jazz masters, saxophonist Ron Blake of St. Thomas and trumpeter Etienne Charles of Trinidad.

Victor Provost has created a collection of inspired pieces that reference his experiences, influences and dreams on his brilliant new Bright Eyes. He has also taken the steel pan to new heights in jazz expression, respecting the historical essence of the instrument while forging new musical territory.

Bandcamp Daily  your guide to the world of Bandcamp